The Road to Becoming 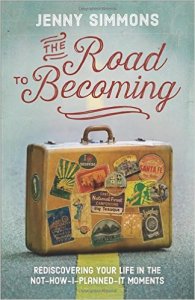 It was the fall of 2009, and I was on an airplane with my mom. In the row in front us sat a young couple with their baby daughter. They looked like nice people, and there was something about them – some intangible quality – that made me assume they must be Christians. My mom and I exchanged a few brief words with them (mostly commenting on their baby’s cuteness) and the flight took off shortly afterwards.

We had seen two other guys traveling with them, along with some musical instruments, so we thought they might be part of a band. When I got home, I decided to figure out who this group was, and I searched online for a list of Christian bands. I found an alphabetical listing and soon stumbled upon a group called Addison Road. Amazingly enough, this was the same band I had seen on the airplane! The couple who had been sitting in front of us were Jenny and Ryan Simmons (Addison Road’s lead vocals and lead guitar, vocals, and piano, respectively). After discovering who they were, I started listening to some of their music, which was very beautiful.

When I was given the option to receive an advanced copy of The Road to Becoming: Rediscovering Your Life in the Not-How-I-Planned-It Moments, I didn’t recognize Jenny Simmons’ name, and I didn’t put it together that she was the Jenny Simmons of Addison Road. But I had read a brief blurb about the book, and it looked like something I would enjoy. When I first started reading the book, all I could think of was that this woman’s childhood reminded me of my own. Like Jenny, I have always loved to sing, and I was even raised in two of the same states that Jenny grew up in. But before I read much more of The Road to Becoming, I glanced at the back cover, saw the mention of Addison Road, and immediately realized who the author was. (In retrospect, I probably should have read the Prelude first!)

I love this book. With humor, heartfelt emotion, and a strong writing style, Simmons shares different life stories and narrates key moments in her life journey. The theme of the book reminds me of the old adage, “Man plans, and God laughs.” Many things in Simmons’ life did not go exactly as planned, and often she did not know the exact direction in life that she was headed. But Simmons was able to still follow God while embracing the uncertainty of life. As she says in her closing chapter, it does not matter what road she finds herself on, because she is part of God’s story.

The Road to Becoming will be released on Amazon on September 1 and is now available for pre-order.