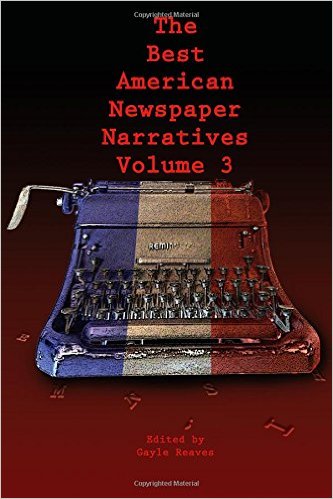 I like fiction, but in general, my favorite books are non-fiction. And I love reading newspapers. If you, too, are a news fanatic, you may enjoy The Best American Newspaper Narratives Volume 3, edited by Gayle Reaves and published by University of North Texas Press. It includes an assortment of well-written newspaper stories, such as “Boys in the Bunkhouse,” a New York Times narrative that exposed abuse in an Iowa group home, and “A Father’s Scars,” a Washington Post narrative about a Virginia state senator, one year after his son stabbed him (and killed himself).

Another very interesting story in the collection, “Then The Walls Closed in” by Sarah Kleiner Varble, focused on homeowners who were becoming ill in their homes; the culprit turned out to be Chinese drywall. I especially liked Varble’s narrative (which was written in four parts), because it brought light to important safety issues. Each article included in the collection has its merit, and it is nice to have a book with compelling articles crafted by skilled journalists.

You can find The Best American Newspaper Narratives Volume 3 here.