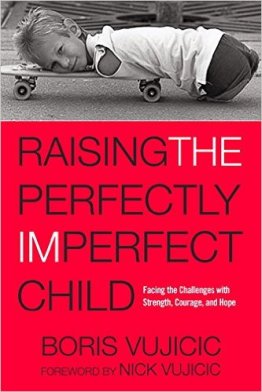 I have read Nick Vujicic’s book Love Without Limits (and I also saw him speak him in person!), so I was very excited to read Raising the Perfectly Imperfect Child: Facing Challenges with Strength, Courage, and Hope, written by Nick’s dad, Boris Vujicic. It was very interesting reading about Nick’s early life from his father’s perspective, and also learning about different medical and educational decisions his parents made, such as why they placed him in mainstream school.

Nick has spoken about his birth and his parents’ initial reactions to his physical disability, but this book gives a very detailed account of Boris and Dushka’s perspective of their son’s birth, childhood, and transition to adulthood. Raising the Perfectly Imperfect Child shows how Nick’s parents acted as advocates for their son’s wellbeing and independence. They took a situation they did not expect, and found the beauty in it.

The book will be released on Amazon on April 19. You can preo-order it here.